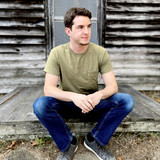 Project Atlantic is the solo project of Josh Zimmer, a South Jersey-based multi-instrumentalist who began recording material of his own during his late teens while studying jazz in college. Project Atlantic blends the genres of indie rock, dream pop, and shoegaze together - all from the bedroom of a single musician. Project Atlantic's first release was A Warm Winter EP, a five song collection that was slowly crafted over the course of two years. It was released in December 2013. 2016 saw the release of Project Atlantic's first full length album, For the Rest of Our Lives. Another album, Music Inspired by the Motion Picture,