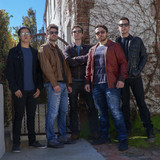 cloudrunnersmusic.com Origin: Iowa City, IA to Ventura, CA Genre: Alt-Rock / Pop-Rock Formed: 2017 The CloudRunners are a modern alternative rock band formed in Ventura, California in 2018, but band creators and brothers Chris and Nick have been working toward their music goals since long before that. Originally from Iowa City, Iowa, they have been writing, playing, recording, and producing original music since 2006. Unfortunately, most of that time they were half the country away from each other while going through college and taking their first jobs after graduation. They were finally able to join up again when they were both offered mechanical engineering positions for a satellite mechanisms company in southern California. There they met Peter, another mechanical engineer for the company who shared their goal of making a career in music. The trio has been supported by other musician friends to fill out the band since they started in 2018. In two short years, they have gone from playing local bars on weekends to rocking California’s Ventura County Fair with Collective Soul, opening a show for Royal Bliss, and performing alongside Hinder. Their momentum took a hit when the coronavirus pandemic brought the music industry to a halt in early 2020, but the CloudRunners hardly let that stop them. While unable to play shows, they focused on building their own studio and recording original music.