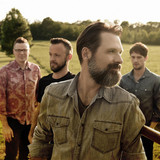 Mac Powell and the Family Reunion

"['Back Again'] exemplifies the band's high-energy sound," stated Billboard. "The remainder of the album, like the band's live shows, is a blend of country, rock and gospel, brought to life with Powell's gritty, soulful voice." “Like most people, I grew up listening to my Mom and Dad’s record collection,” says Powell. “There was singer-songwriter stuff, some country and southern rock. I always liked artists like CCR (Creedence Clearwater Revival), James Taylor, the Eagles or even the Stones who weren’t country per se, but who sometimes leaned more toward that sound. That’s what was stirring my mind and my spirit.” To that end, he formed Mac Powell and the Family Reunion after Third Day’s final shows in 2018, utilizing musical “brothers” who had been recording and playing live with Mac in support of his other solo projects, including his 2012 self-titled debut and 2014's Southpaw. Recorded in Atlanta with producer/musical director Jason Hoard, Powell and his bandmates purposely kept a raw edge to the record. The result is a welcome looseness and down-home charm to Back Again. Beginning with the title track, Mac and his band are equally comfortable crafting singalongs ("Whoo!" featuring Craig Morgan), gentle ballads ("Red on a Rose") and hand-clapping, toe-tapping country pop ("Going to California," "Mississippi").