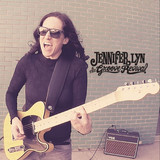 www.jenniferlynmusic.com ABOUT THE LATEST RELEASE If you want to hear top 40 radio, this isn’t it! Her band's latest project, titled “Nothing Holding Me Down”, features music from a woman who clearly has a soul set ablaze like a person baptized in the river of Rock n Roll. Lyn was a child heavily influenced by the sounds heard while spinning her parents’ vinyl, and that influence led her to capture various genres on this release such as Rock, Blues, R&B, and a dash of roots music. This album is reminiscent 60s and 70s vibe melted into a pot of contemporary Blues-Rock. "Nothing Holding Me Down" ups the ante and proves that previous press quotes related to her music still ring true. Such as: “Jennifer Lyn proves that she will be a force to be reckoned with in the Blues Rock world. She’s a gifted singer and guitarist who’s also capable of digging deep from within as a songwriter” – Blues Bytes Magazine “Female Blues guitarists have long been an important part of the Blues-Rock world…and now we can also add Jennifer Lyn & The Groove Revival to that list.” – Blues Magazine