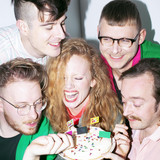 After 2017's well-recieved 'Good News', we will release our fourth album. It's 'Things That Don't Go Right' because, well, most things usually don't go right. The creative process for this collection of songs, however, went quite smoothly. Most of the record, along with its first single, 'Close' is inspired by classic 70s and 80s rock, with its typical dual guitar solos, vast synth riffs and equally vast choruses. The band's pop sensibility endures, though it certainly is coloured by the nostalgic sounds of yesteryear and the willingness to let the songs grow longer and really build up over longer periods of time. All in all it is the sound of a band that's feeling more and more like themselves, with the added reinforcement of Michaël Lamiroy. Bent Van Looy's apocalyptic work 'The Prophecy' was a big visual inspiration during the creation of 'Things That Don't Go Right' and Tijsje Revalk's artwork makes good use of the painting's moody Greek Temple complex and dramatic lightning. The main goal in producing this album was to recreate the joy of playing School is Cool's songs live. You can witness the band doing just that at gigs in Brussels, Ghent and Antwerp, with a revamped live show.