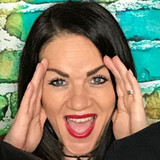 Sophia has had a number of commercial releases on various labels as a solo artist and in collaboration with other world class artists and producers. She has had the honour and pleasure to have written and worked with some of the world's greatest musicians, including writers and players behind Frank Sinatra, Sammy Davis Jr, Celine Dion, Cher, Rod Stewart, Andrew Lloyd Webber and more!. Performing live gigs as well as recording in the studio, she writes songs for both herself and other artists / bands. Whilst her solo albums are a more funky, soulful flavour, her delectable vocals have also graced many tracks in Dance and Urban genres, receiving love and support from club DJ's and various radio stations, as well as ranking highly in various Dance Charts. Her versatility and vocal prowess are ever present in her performances and commercial releases with her live, electronic band - Sophia Syndicate. High energy, fast-paced music to party to, their cutting edge sound is centred around her unique voice. Owning stages at festivals, their big beats and big bass are sure to get the party moving. Sophia also runs Seaview Studio in Kent, UK with her husband and business partner Tim Smith AKA Technical Finger. They both work on a variety of musical projects, events and coaching. As a vocal coach Sophia helps others to understand their voice. Her writing skills are also put to use by working with up-and-coming artists to refine their material and improve their recordings.