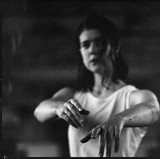 To encounter Lucy Kruger’s music is to witness a singular journey of constant reflection that is producing an ever-widening arc of creativity. Kruger approaches her artistry with the care of an archaeologist seeking all the interwoven elements that make up the historical whole.

Lucy grew up in Johannesburg where she began writing songs as a 16-year-old and laid the foundation for her absorbing, fervent live performances while studying music and drama in Grahamstown. She then spent several years in Cape Town where she first met long term musical collaborator, André Leo. It was with Leo that she first played in Berlin during a Medicine Boy European tour in 2015. Kruger explores many themes in her music including the centrality of women in Kruger’s lyrics, as listeners, and in her own life. “There is more pressure on a woman to figure herself out in private and then step out with a formed identity. It’s suffocating,” she says. “How are we supposed to discover who we are if we are not allowed to make a mess? To leak, spill, sweat, spit, shriek. Sometimes playing involves getting scratched or wounded. Laughing. Weeping. It also involves glorious thrill and the chance to surrender. I’m looking for that. “I do not know how to write without making it personal, and for now I do not wish to”. She does this as a gift, both to herself, and the listener who might need it on their own journey, filled with all the risks of what it means to be human. - Diane Coetzer