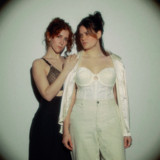 When Overcoats released their second full-length The Fight in 2020, they threw themselves into the ring. They found strength in total brokenness and confident composure alike, with their bright harmonies, pummeling guitars and empowering lyrics leading the way. The album served as a rallying cry and a prescient document for persevering through an exceedingly difficult year. As Hana Elion and JJ Mitchell ready their next chapter, they channel the resilient energy they ignited on their latest album, but pair it with new sonic palettes. The title of their new EP, Used To Be Scared Of The Dark, is telling. While The Fight was deep in the trenches, this EP revels in resolutions and the resulting self-growth. It’s about honoring the past uphill battles and acknowledging current feelings, but searching for stability. It’s a heartwarming exhale and an acceptance of the unknown, even as they revisit mistakes and recognize the messiness of their emotions. They arrive at crucial realizations here—like you can’t always compartmentalize the good and the bad, or perhaps most importantly, scars might not fully heal, but they remind us of our perseverance through the fight. The Fight was released in 2020 via Loma Vista Recordings, and received acclaim from The New York Times, NPR, Paste and more. It follows their 2017 debut album YOUNG. Used To Be Scared Of The Dark is out June 4th via Loma Vista Recordings.