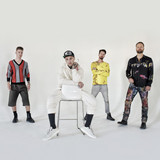 A muscular, hard-hitting power rock outfit in the vein of Queens of the Stone Age, Band of Skulls, and Royal Blood, Brooklyn's Highly Suspect rode a series of indie EPs and years of touring to a pair of Grammy nominations for their 2015 debut. A year later, their follow-up delivered another hit in the Grammy-nominated single "My Name Is Human," setting high expectations for their third outing, 2019's genre-hopping MCID. The band formed in Cape Cod in 2009 around the talents of Johnny Stevens (guitar, vocals, synths) and twin siblings Ryan (drums, vocals) and Rich (bass, vocals) Meyer. After working regionally as a cover band, they relocated to Brooklyn and began recording original material, resulting in a pair of EPs, First Offense (2009) and The Gang Lion (2010). They continued to establish themselves with one more EP, The Worst Humans, in 2012 before heading into the studio with producer Joel Hamilton (Black Keys, Elvis Costello) to record their debut long-player. The resulting Mister Asylum, which featured the fiery single "Lydia," was released via 300 Entertainment in 2015. Their debut received critical praise and two unexpected Grammy nominations, leading to an extensive supporting tour. Off the road by early 2016, they immediately returned to the studio to record a second full-length, The Boy Who Died Wolf, which saw release in November of that year. The album's lead single, "My Name Is Human," topped Billboard's Mainstream Rock chart and earned Highly Suspect another Grammy nomination for Best Rock Song. As early as November 2018, they began teasing information about their next album which they later revealed would be called MCID. A pair of singles, "Upperdrugs" and "16," were released in August of that year, with the eclectic, hip-hop-infused MCID, which featured guest spots from Young Thug, Gojira, Tee Grizzley, and Nothing But Thieves' Conor Mason, arriving in November 2019. ~ James Christopher Monger, Rovi