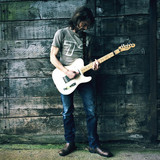 Hailing from Somerset, England, Jason spends his time writing and recording albums and EPs, the most recent of which (June 2021) is called Natural Courses. It's the latest reply in an ongoing unofficial 'album battle' with Taylor Swift, a conflict of which she knows nothing about. Partly because of 'control freak' tendencies, and partly because he can, Jason plays all the instruments on his songs. He also does the studio-based tomfoolery, often late at night in a tea-induced Shamanistic manner. The music is recorded in a rural hideaway somewhere in a corner of Somerset, which is patrolled by legions of ninja bats. Jason occasionally plays his songs live to audiences consisting of people looking at their phones and talking loudly about football and their new cars. For this reason, he doesn't do quite as much stage work these days, instead preferring to perform to an assortment of wild animals and passing hikers. When not making music, Jason can be found sleeping, or sat by the river watching the water go by.