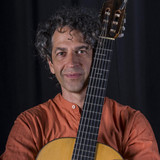 Itamar's music holds a depth and sensitivity that touches listeners deeply. It blends the delicateness of Middle Eastern music, the freedom found in jazz and the passion of flamenco, creating a unique sound all his own. Recipient of the 2014 ACUM Prize for Special Achievement in Jazz, and the prestigious 2014 Landau Prize, Itamar Erez is an internationally renowned composer and guitarist who has shared the stage with such musicians as Omar Faruk Tekbilek, Jean-Louis Matinier, Zohar Fresco, and others. His most recent CD “Mi Alegria” was released in June 2019 with the support of the Canada Council for the Arts, and has already received raving reviews, both nationally and internationally, including a recent nomination for the 2020 'Instrumental Artist of the Year' Award, from the Canadian Folk Music Awards.