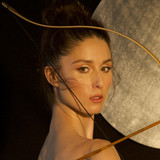 Composer, entrepreneur and bilingual singer, Francisca Valenzuela is one of the most active representatives of Chilean pop in the world. The promising start of her career in 2007 with the hit single "Dulce", was only surpassed by a constant recognition in the music world where she has two platinum albums, a Latin Grammy nomination and her collaborations with artists such as U2, Miguel Bosé, Pablo Alborán, Mon Laferte, Natalia Lafourcade and Pedro Aznar, among others. Her discography has been produced independently through her own record label Frantastic Records: "Muérdete la lengua" (2007), "Buen Soldado" (2011) -both platinum albums- and Tajo Abierto (2014). Her latest singles: Tómame , Ya No Se Trata de Ti