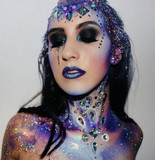 Scarlett Taylor is an American singer and songwriter. She is a professional recording artist signed to independent record label Borderline Musick. Originally based out of Minneapolis, Minnesota, Taylor jump-started her career in the twin cities with the recording and release of her first four albums. She supported these releases with shows at various venues such as Seventh Street Entry at First Avenue and the Fine Line. Scarlett currently resides and works out of Los Angeles, California where she has performed at venues such as The Whisky A Go Go and The Rainbow.   Singing and writing from a very young age, Scarlett's interest in music was evident from the beginning. Taylor grew up listening to many different music genres - including Deftones, Evanescence, Enya, Amy Winehouse - in which she says have heavily influenced her writing and musical style over the years. Singing in the choir at church and school, as well as being involved heavily in theatre, were part of Taylor's everyday life.   Taylor and Davis started creating together in October of 2014. They quickly produced "Lucid," a sad core, down-tempo collection of ballads and poetry. Lucid was released in March of 2015, just five months after Davis and Taylor started working together.   Taylor moved to Los Angeles in July of 2018. She is currently working on building up her audience in the City of Angels, and of course, creating more music with producer Davis.