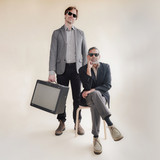 David Dewese and Jerry James met as kids in their native Mesquite, Texas. After graduating from college, Dewese moved to Dallas, where he and James started making lo-fi recordings. Shortly afterward, Dewese moved to Nashville, where he played in several bands, including The Luxury Liners (named after a Gram Parsons song). In the meantime, his and James' Dallas recordings were released under the moniker the Foxymorons -- though the "group" had never played a live show. The band's debut LP, 1999's Calcutta, was assembled long-distance between Dallas and Nashville, with the two sending tapes back and forth. In March 2000, the Foxymorons finally played their first gig at the South by Southwest music festival in Austin. The two put together 2001's Rodeo City -- a pun on the Big Star album Radio City -- in much the same manner as their debut. However, Matt Pence and Will Johnson of lo-fi rockers Centro-matic were employed as bandmembers. The result was a more assured and focused effort than Calcutta. The third Foxymorons album, Hesitation Eyes, arrived in 2005. Their next album, 2010's Bible Stories, was recorded in Nashville, and their warm yet gritty, wistful guitar pop continued to draw comparisons to Big Star and Pavement. Continuing a steady but sparse release schedule, their fifth LP, the more aggressive and anxious Fake Yoga, was issued in the fall of 2015 and featured Will Johnson (Centro-Matic) on drums. ~ Erik Hage