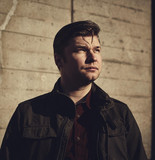 Hailing from the northern town of Middlesbrough, Scott Lloyd is an English singer songwriter. In his younger years, Scott was influenced by his fathers passion for music which eventually lead him to teaching himself the acoustic guitar. Scott is inspired by singer songwriters such as Lennon & McCartney, Bob Dylan, Simon & Garfunkel and Bruce Springsteen. After graduating from Manchester Metropolitan University, Scott moved to the city and self-released a string of EPs which were well received among listeners and critics alike. This, along with consistently playing live at open mic nights around Manchester, built up a solid reputation for Scott as a talented musician. Scott’s music is known for its melodic and lyrical qualities. A combination of Neil Young's emotional and personal lyricism and The Beatles' catchy and flowing melodies, with recognisable influences from Ryan Adams, Richard Hawley and The Smiths. In early 2018, Scott signed to Cornwall based independent record and publishing label, Aardvark Records for three years. A string of singles were released throughout the year which accumulated with the release of Scott's debut album in early 2019. Scott was invited to an acoustic live session at BBC Introducing Tees and played at Glastonbury Festival in 2015. Scott then crossed the Atlantic to perform acoustic shows on a tour from San Francisco to Vancouver in Canada. You can follow Scott Lloyd on social media to keep up to date with latest news and releases.