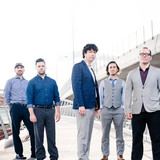 ABOUT THE QUINTET FORMATION: In the same way a chef de cuisine runs a kitchen, percussionist Brian O’Neill leads a team of five musical creators who deftly collaborate on instruments foreign and domestic to form modernist delicacies for hungry, curious listeners. From the high arts of jazz and chamber music to adaptations of mid-century exotica and pop art, the quintet version of Mr. Ho’s Orchestrotica renders O’Neill’s original compositions and curious adaptions of Bach, Gershwin, Shostakovich and John Adams into cinematic, layered music for armchair travelers ready to journey off road.

“Anything but straightforward” —Washington Post ABOUT THE ESQUIVEL MEGABAND Mr. Ho’s Orchestrotica—in its Esquivel Megaband ensemble formation—is the world’s only way to experience the lost space-age pop music of Esquivel, live. Via meticulous transcriptions from the original 1950s hi-fi recordings, the band has recreated this masterful musician’s lost arrangements and presents them in a program called, Sonorama: The Lost Music of Esquivel. Featuring the music of Billy Strayhorn, Cole Porter, Ernesto Lecuona, and others, the show exposes listeners to the wild, zany mind of Mexico’s king of space-age bachelor pad music. In stereo, of course! They released The Unforgettable Sounds of Esquivel to memorialize their reconstruction of Esquivel's music, and the album received 4/4 stars from the Sunday London Times and was a Huffington Post Top 10 Album of the Year in 2011.