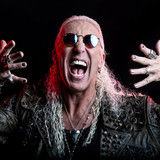 When Twisted Sister called it quits in 2016—after 40 years, three platinum albums, and the timeless hit anthems “I Wanna Rock” and “We’re Not Gonna Take It”—singer Dee Snider was ready to hang up his mic. If not for good, at least a good long while.“I was done,” says the Broadway- and reality-TV star. “I had other plans creatively. I’ve been doing radio 25 years. I have a production company. I’d just sold an animated children’s show to Netflix.” But singing in a rock/metal band? The famed frontman was done…Until he wasn’t. Less than 12 months after Sister’s swan song, Snider guested on The Jasta Show, the popular podcast hosted by Hatebreed vocalist Jamey Jasta. “On air he literally challenges me to do a ‘true’ metal record, saying he’s ready to produce it and make it reality,” Snider explains. “Jamey didn’t finish the sentence before I was in. I’m all about the challenge.” That end result of that dare? For the Love of Metal, a stunning album of 12 metallic gems certain to make year-end best-of lists. From the speedy modern-metal onslaught of “Lies Are A Business” to the bass-heavy power and unforgettable chorus of “Tomorrow’s No Concern,” For the Love of Metal is Snider conquering current metal. The collaborative album, spearheaded by Jasta, features vocal and songwriting guests including Alissa White-Gluz of Arch Enemy; Killswitch Engage’s Howard Jones (who sings on “The Hardest Way”); Logan Mader (Machine Head, Soulfly); and Lamb of God’s Mark Morton.