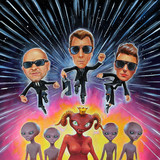 When he's not fronting Tool and A Perfect Circle, Midwest-bred singer/songwriter Maynard James Keenan exorcises his solo demons with a third project dubbed Puscifer. As an outlet for the darker and more personal musings that don't quite fit into the Tool and APC molds, Puscifer blends introspective reflection and sophomoric humor in a way that is distinctly Keenan, apparent in the titles of releases such as the 2007 debut V Is for Vagina, 2013's Donkey Punch the Night, and 2015's Money $hot. By 2020, in light of world events, Keenan and company buckled down and got a little more serious for their fourth set, Existential Reckoning. While one might imagine Keenan would have enough going on to keep him busy as vocalist for Tool and A Perfect Circle, in 2007 he decided to branch out with a project called Puscifer. Described by Keenan as "the space where my Id, Ego, and Anima all come together to exchange cookie recipes," Puscifer first appeared as the name of a fictional band Keenan fronted in a cameo on the HBO sketch comedy series Mr. Show in 1995. It wasn't until 2003 that Keenan actually recorded under the name, when he teamed up with Danny Lohner for a track called "Rev 22:20" for the Underworld soundtrack. Four years later, he set to work on an entire Puscifer album. Organized less as a traditional "rock band" and more as a musical collective in which Keenan could work with a rotating lineup of like-minded artists, Puscifer's early recording projects featured a large cast of noted musicians, including Tim Alexander from Primus, Tim Commerford and Brad Wilk from Audioslave and Rage Against the Machine, former King Crimson member Trey Gunn, violinist Lisa Germano, pop singer/songwriter Jonny Polonsky, and actress and vocalist Milla Jovovich. The first product of Puscifer's new life was a single issued in early October 2007; the A-side was "Cuntry Boner," a gleefully offensive song originally recorded by Electric Sheep (a short-lived punk band featuring Adam Jones and Tom Morello years before they would respectively join Tool and Rage Against the Machine), while the flip side was a cover of the Circle Jerks' "World Up My Ass." Later the same month, Puscifer's debut album, V Is for Vagina, was released; like the single, it was issued in the United States by Keenan's own Puscifer label, and it featured ten original songs, many of which were dominated by slow but potent dance grooves rather than Tool's prog metal textures. Keenan said the group had no immediate plans to tour, but he was collaborating with several filmmakers on short movies based on the songs, which could be shown at live performances. In April 2008, a remix album titled V Is for Viagra: The Remixes was released and featured contributions from members of Nine Inch Nails, Telefon Tel Aviv, Ministry, and Slipknot, among others. Keenan returned the following year with the EP "C" Is For (Please Insert Sophomoric Genitalia Reference Here) before releasing the full-length Conditions of My Parole in 2011. The EP Donkey Punch in the Night arrived in 2013 with a pair of new tracks, as well as covers of Queen's "Bohemian Rhapsody" and Accept's "Balls to the Wall." Money $hot, the band's third studio LP, followed in 2015 and featured the single "Grand Canyon." A remix collection, Money $hot Your Re-Load, arrived the next year. To close out the decade, Keenan revived both A Perfect Circle and Tool, which kept him busy into 2020. That year, along with longtime collaborators Carina Round and Mat Mitchell, Puscifer issued their fourth long-player, Existential Reckoning. More subdued and with less jokes than usual, the album took aim at American society in a year consumed by pandemic and political turmoil, which could be heard on the singles "Apocalyptical" and "The Underwhelming." ~ Mark Deming & Neil Z. Yeung