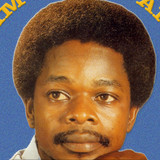 Sam Mangwana is one of the last of the great Zairean rumba (soukous) vocalists. A former member of such seminal groups as Tabu Ley Rocherau's Africa Fiesta and Franco's TPOK Jazz, Mangwana has steered soukous from the hard-edged sounds of his predecessors. According to the Washington Post, "While his former employers were the masters of the relentless, springy, soukous music of Central Africa, Mangwana employs a lighter, more acoustic, more Caribbean, sound." In a review of Mangwana's 1999 concert in New York, the New York Times took a similar view, writing, "It was gentle-spirited music, perfect for the dancers moving through the soupy summer air." Mangwana's soft-toned approach was equally noticeable during a performance at the Smithsonian Institute in Washington, D.C., as www.salsamundo.com observed, "In a program rich with influences from Angola, Mozambique, Cape Verde, The Congo, and Cuba, Mr. Mangwana sang in a rich, weathered tenor about serious issues of oppression and liberation, yet the delightful and engaging lilt of his music conveys optimism and the triumph of love." The son of Angola-born parents who relocated to Kinshasa, Mangwana has been singing most of his life. After formally studying music as a member of the Salvation Army chorus, Mangwana launched his professional career in his mid-teens. By the age of 17, he had become the lead singer and arranger for Tabu Ley Rocherau's Africa Fiesta. In addition to singing with the group for more than a decade, he appeared periodically with other soukous bands including L'Orchestre Tembo, Vox Afrique, and Franco's TPOK Jazz. Forming his own group, the African All Stars, in 1976, Mangwana had his first hit in 1986 when his single, "Maria Tebba," became a major soukous hit. In the more than two decades since, Mangwana has continued to bring his unique style of soukous to the international stage. In 1999, he toured the United States with African All-Stars guitarist Dizzy Mandjeku and OK Jazz Band guitarist Papa Noel. The following year he released Sam Mangwana Sings Dinu Vangu. ~ Craig Harris, Rovi