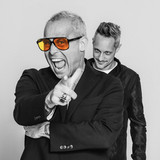 THE CUBE GUYS is a club undertaking that was born in 2005 between two of the most prominent producers in Italy: Roberto Intrallazzi and Luca Provera. Although their backgrounds and professional training differs, their common desire to release new productions and contribute to the international club scene is equivalent. Together, they combine their previous experiences and endeavors to launch a fresh and innovative musical journey!   Roberto Intrallazzi has been at the forefront of Italy’s scene since he began DJing and producing in the late 80’s. This transitional period between decades helped the development of his trademark sound, a fusion between old school electro and house. The two initially met in 2000, when Luca Provera was still an up and coming producer fresh in the game. Possessing a deep understanding of both digital and analogical devices, he quickly became a studio workhorse for many of Italy’s biggest players. The Cube Guys come from vastly different backgrounds, a key component that fosters their creative drive. With a constantly evolving sound, from House to Tech House stylings, Roberto Intrallazzi and Luca Provera continue to offer dance music fans a true breath of fresh air.