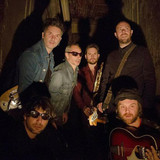 On 2014 Tsunamis reissues their self-titled debut in a 10 year anniversary de-lux edition on vinyl and this release marks a new era for Tsunamis in collaboration with BYM Records, a Chilean label with whom Tsunamis would start working their 6th studio album 'Trans Express Sudamericane '(BYM052) released in July 2017. This album has once again put Tsunamis in the arena as one of Chile's best musical acts, both live and in studio. Born in mid-2002, Tsunamis is currently formed by Goli Gaete on guitar and vocals, Francisco Fernández on guitar, Seba Arce Ilic on drums, Pato Larraín on bass, Raw-C on piano and synthes, Sebasax on tenor and alto sax and Tan Vargas in lap steels and guitars. Being Goli and Pancho the original members, the gang of old friends has well-known Chilean musicians in their line up, artists that have played in bands such as Yajaira, Panico, Sub radical, Tío Lucho and Chicos de Nazca.