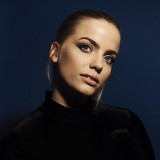 In 2017, the song "Run Free" was released. A collaboration with producer Deep Chills, where IVIE has the vocals and is the songwriter. The song became one of the first to go viral on TikTok and this resulted in the song reaching 131 place on Shazam's global list and at the time of writing has over 50 million streams in total on Spotify and Youtube. "Run Free" has been used by several big names on TikTok, which extends all the way from the NBA to Jason Derulo. IVIE has previously received good reviews in Norway and abroad for her own music that bears more of a minimalist R&B sound where the vocals are in focus. Now she's once again ready to release songs that she's been working on in recent years while getting a bachelor's degree in performing arts. About her most recent release «Nothing For You», IVIE says «It has the intention of being a me too-anthem. I felt inspired to write this song in the late 2017, when finally abuse of power and sexual harassment of women in the workplace had to face more severe consequences. I needed to express my feelings and thoughts towards the injustice. I hope the song can help empower women and contribute to the celebration of the, still very important, International Women’s Day.»