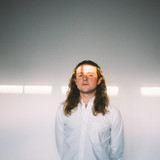 “When people ask what’s going on with the San Francisco music scene, point them in the general direction of Andrew St. James.” –SF Chronicle San Francisco native and singer-songwriter Andrew St. James is a rare talent who has single handedly combined San Francisco’s beatnik past with its willfully high-tech future. St James writes and performs music that lives up to the mythology created by Neil Young, Jerry Garcia and Jack Kerouac while easily meeting the bar set by current luminaries such as Father John Misty, Ryan Adams, and other keepers of the singer-songwriter flame. But Andrew St James is in a class of his own, as a listen to any of his recorded work will make readily apparent.