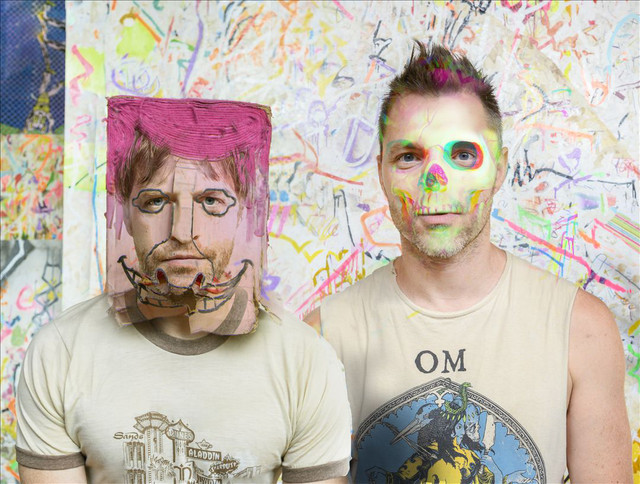 Bridging the worlds of technical playing and noise chaos with a color and imagination unlike any other band, Providence, Rhode Island duo Lightning Bolt began their hypnotic pummeling in the mid-'90s and grew to become one of the most powerful and unique entities in the indie scene. Barely recognizable bass tones and unrelenting drums played in telekinetic lockstep defined the band's sound on albums like their 2003 high-water mark Wonderful Rainbow. Lightning Bolt first took shape in 1995 as a three-piece art school project. Initially, Brian Chippendale's explosive, nonstop drumming, Brian Gibson's Contortions-like basslines, and Hisham Baroocha's vocals propelled them into a fury of volatile noise and orgiastic tribalism. The group helped found Fort Thunder, a music and art collective, and recorded a self-titled album that was issued through Load in 1999. By 2001's Ride the Skies, Baroocha had departed (he eventually formed Black Dice). This left the vocal duties to Chippendale, who jammed the microphone into his mouth as he drummed. Lightning Bolt played a series of tours with bands like the Locust, Arab on Radar, Orchid, and Melt Banana, some of which were the focus of band documentary The Power of Salad, a 2003 film directed by Peter Glantz and Nick Noe. Their next studio album, Wonderful Rainbow, embraced a more demented approach to traditional rock forms. The record did very well in underground music circles and set up the release of 2005's Hypermagic Mountain. Lightning Bolt toured frequently, but didn't return to the studio until 2009's Earthly Delights, which was followed in 2012 by mini-album Oblivion Hunter, comprised mainly of archival recordings unearthed and cleaned up for release. Though they were still touring sporadically, both Gibson and Chippendale were busy with various other projects, ranging from Gibson's involvement with doom metal band Megasus to Chippendale's growing art career and prolific solo project Black Pus. Lightning Bolt returned in 2015 with sixth album Fantasy Empire, their first new material in over five years and their first music recorded in a fully functional, high-end recording studio. After a similarly lengthy four-year break, the duo released their seventh LP, Sonic Citadel, in October 2019. ~ Daphne Carr, Rovi