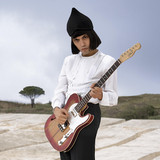 808g is the alias of Juan Ignacio Diaco Vidal, the London-based Argentinian singer, performer, multi-instrumentalist, producer, mixer and guitar tech/luthier.   His debut single, glOw, is a mix of trip-hop, electronic, indie, alternative, R&B, dream-pop and rioplatense music. The music video was filmed at one of the largest and most incredible open air art spaces on the planet, in Gibellina, Sicily.   The track was released on 5 March and will feature on his forthcoming debut EP, aWakeNed. It has been written and self-produced by Juan, and features the rappers Ghostalive, Cleva Thoughts, and K-Sper; singers Mr. Pineapple and Léa Aubigne; and lyricist James Chelliah. It was mastered at the world famous Abbey Road Studios, by Alex Wharton.   He will make his live debut in London on October 30th, at Hope and Anchor (in Islington).