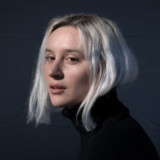 A Canadian composer, pianist and producer, Katharine Petkovski draws from many genres of music, layering and experimenting with acoustic instruments and synthesized textures to create exciting sonic palettes. Katharine has released a number of recording projects and has composed music for Canadian ensembles like Odin Quartet, Bedford Trio, and most recently, the Exultate Chamber Singers. Katharine is especially passionate about scoring music for multimedia, and has written for a variety of films, most recently With Love from Munera (2020), a documentary that premiered at Inside Out Festival, Canada’s largest LGBTQ+ festival, and was shown at TIFF Next Wave Film Festival, along with the Reel Asian Film Festival. Katharine holds a BMus in Composition from the University of Toronto ('19), and a MMus in Composition from the University of Toronto ('21), where she received the prestigious Tecumseh Sherman Rogers Graduating Award upon completion. Katharine sings as an alto in Exultate Chamber Singers, Concreamus, and is an active member of the Screen Composer’s Guild of Canada, along with the Alliance for Women Film Composers.