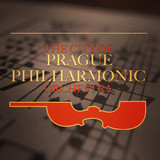 The City of Prague Philharmonic Orchestra

The Best of The City of Prague Philharmonic Orchestra The City of Prague Philharmonic Orchestra is a world-renown professional symphony orchestra, founded over 60 years ago. The orchestra features predominantly Czech classical and jazz musicians…with guest players selected from musicians studying at the Conservatoire in Prague. The orchestra started out, just after the end of World War II, as the in-house orchestra for the huge Barrandov Film Studios, regularly playing music for film and animation productions made at the world famous Prague studios, as well as featuring in the historic Krátký Film productions (meaning “short film,” in Czech), and productions for the former Czechoslovak Television. In recent years the orchestra have performed many concerts of classical and film music repertoire throughout Europe but especially Germany, where they are the “in house” orchestra for Klassik Radio. Now, with the international acclaim for their prize winning recordings, the orchestra is receiving requests for more live concerts around the world. These request recently peaked with the orchestra performing in front of an audience of 20,000 in Santiago, Chile with conductor Nic Raine and guest soloist Itzhak Perlman.