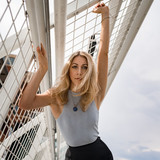 Arily Michele is named after an acronym her parents used in letters to each other that means “Always remember I love you” (pronounced air-ill-ee). She is notorious for her bewitching vocals and intelligent songwriting.   Arily moved to Denver to find her voice and wound up recording an entire album. The much-needed change in scenery gave her the inspiration she needed to find herself after feeling lost for so long. Her debut album, Echolalia, is about learning to love herself, defiantly, in a world that taught her self-loathing. Since its release in January of 2021, Arily has been featured on Colorado Public Radio and more. She has plans to release a second album in 2022.   Arily is also the lead singer, songwriter, and keyboardist for Viewfinders.