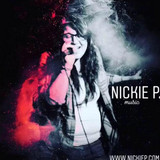 From murky basements to major music venues.... Nicole Price has been heavily involved in the music scene her entire life. She was primarily trained in classical music but soon found her true passion for Hip Hop at age 14. In 2003, Nickie joined forces with her brother Esque Roxwell and the Seven Chakraz crew, making her official entrance into hip hop culture. The Seven Chakraz disbanded around 2007, but Nickie was still hungry to make music. She began her solo career and sought the assistance of local Southfield Michigan entity, Daleth Music Group. She released her debut solo album entitled The Glitter Wars in 2009 under Deleth's guidance and continued her push for self expression. During her search, Nickie made the decision to leave Deleth to pursue her music career on her own and later went on to release her second album entitled The Triumphant Rise & Tragic Existence of Sick Nick in 2013. Since her second album release, Nickie has put her focus into performing, promoting, and further developing her skills as an artist. She has directed some of her focus back into her education and is currently studying Arts and Entertainment Administration and Management at Easter Michigan University. She has opened for hip hop greats such as KRS-One, Digable Planets, Vast Aire (of Cannibal OX), Jay Electronica, Blackalicious, and R.A. Tha Rugged Man and has organized many local music events in her community.