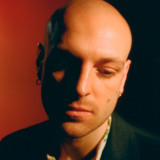 British musician and producer Leon Vynehall—part of a vanguard of artists expanding the ambition of electronic music—will release his new album ‘Rare, Forever’ on April 30th on Ninja Tune. Following 2014’s breakthrough ‘Music For The Uninvited’, and after bringing euphoria to dancefloors all over the world with the humid house of 2016’s ‘Rojus (Designed To Dance)’, he took a sharp left turn with debut album ‘Nothing Is Still’ in 2018—a masterclass in subverting expectations, with Pitchfork touting Vynehall as an artist who “demands and merits our full attention.” The album garnered widespread praise including appearing in ‘Album of the Year’ lists from Rough Trade, Mixmag, Esquire, The Vinyl Factory, RA and more. It also spawned a celebrated “Nothing Is Still” live-show which saw him hold sold-out residencies in London and at New York’s legendary avant-garde hub The Kitchen, building on his established reputation as a mainstay at festivals worldwide including MoMA PS1 “Warm Up”, Glastonbury, Primavera, Nuits Sonores, Sónar, Melt! and more. His new album ‘Rare, Forever’ is a beautiful marriage of everything he's done so far while remaining genuinely progressive; the end result sounding like ‘Nothing Is Still’ but with the narrative toned down, and the dancefloor dialled up. It will feel familiar for fans of Vynehall’s DJ-Kicks mix, his eclectic excursions on NTS or his 2018 Resident Advisor Podcast, while simultaneously sounding unlike anything he’s ever done before.