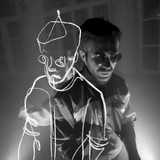 OIEE is the colorful electronical solo project of Bence Kocsis launched in 2019. He is a well-known name in the Hungarian underground music scene both as a producer-songwriter, organizer, multimedia artist, the host of live impro electronical music series ‘WOPO-WOPO’ and leading singer of bands Saverne and Window. OIEE’s main genres are nudisco, dance and R&B, mixing instrumental sounds with tropical and not-so-tropical house, techno, disco and trance elements and modern soul-like vocals, giving

danceable melodies and catchy hooks a very individual and uncompromising sounding. He already published two music videos for his upcoming album Urban Camouflage: the first one, for the track ‘Stays Like This’ (featuring FlorasFloras alias Flora Kiss) was awarded “The Best Scene” music video of the year on Magyar Klipszemle 2019. The second video made for the song Still Dey Inside - the track itself debuted on BBC 1Xtra channel - is featuring amateaur dancers and is based on an improvisational dance workshop. OIEE’s first LP Urban Camouflage features artists such as M3nsa (UK / GH) and Amaarae (US / GH). The album attempts to show how the organic is mixing the artificial, how the superficial monotony of everyday life can be blend together with instinctive, deeper energies.