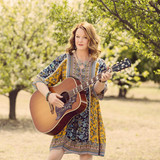 Cherie Call was born and raised in Mesa, Arizona. Cherie has released 10 albums of her original songs. Cherie is a two time finalist at the Kerrville Newfolk songwriting competition, and has played "in the round" at The Bluebird Cafe in Nashville. Her song, "Heart Made of Wind" was featured in the Banff Mountain Film Festival award winning film, "True Fans". Cherie co-wrote a song with Lyndy Butler called, "The Astronaut and the Mermaid", which won the Children's category of The John Lennon Songwriting Contest in 2016. Cherie is a member of the Utah supergroup, "The Lower Lights". She currently lives in Utah with her husband and four children.