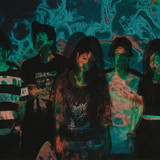 Formed in 2007, Caracal has remained an active force in Singapore’s alternative and heavy music scene. Proponents of continual evolution, both in its songwriting efforts and line-up, the band has undergone radical changes since its inception. With progressive emphasis on dissonant guitar melodies and powerful vocal acrobatics, evidenced on the 2018 EP, Take It Apart and Put It Back Together, and 2019 single, Mouth of Madness, Caracal’s turbulent translations of emotional disruption have carried the band to international stages throughout Asia, North America, and most recently, Australia, representing made-in-Singapore music at BIGSOUND 2019.