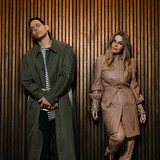 Infernal is formed by Lina Rafn and Paw Lagermann both from Copenhagen, Denmark. Lina and Paw met through mutual friends in 1996 and were both fast to discover they had the same passion: Club music. They soon realized they were a perfect musical match and shared the same ambition. Shortly after Infernal was a reality.

So far the duo has released more than 30 singles and 4 albums. An outline of hit songs and a massive support from the Danish music Industry has made Infernal the longest existing Danish dance act. Unfortunately many of the other Danish dance bands are forever gone. However Lina and Paw fortunately are keeping spirits up developing magic live shows and working hard as producers for both Infernal and other artists.