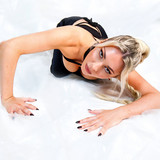 British/Irish singer song-writer Empara Mi was singing from a young age but only hit our music radars back in 2016. The Guernsey born and raised artist moved to London aged just 15 to pursue music and released her first single ’Wanderlust’ as part of a trilogy of concept pieces alongside ‘Spoon’ (Featuring Kojey Radical) and ’World We Live In’. Her later release of ‘Shine On You’ would go on to be used for ITV crime drama ‘BroadChurch’. This was followed by ‘Alibi’ which was picked up by Netflix Original ‘Dynasty’.

‘SHOUT’ is the latest in a string of intoxicating singles from Empara Mi from here debut album ‘SUITCASE FULL OF SINS’ released this year which includes singles, 'WYGD', ‘Ditch’, ‘Blood In The Water’ and ‘Alibi’. These songs have seen Empara Mi unite pop, hip-hop and R&B alongside her striking visual aesthetics to develop a distinct and unique identity, which has drawn praise from the likes of Wonderland, HUNGER, Clash and many more.