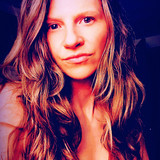 Windsor, Nova Scotia funeral director Terra Spencer discovered a passion for songwriting while touring as a vocalist and guitar player with country artist Ryan Cook, after a chance encounter while she scooped ice cream at a music festival. Since making her solo debut in 2018, she has charmed audiences in the Maritimes, Ontario, the UK, and Europe with deft fingerstyle guitar, gospel piano, butterscotch voice, and easy onstage conversation. Her knack for telling intimate stories caught the attention of Canadian musical mentors like David Francey, Dave Gunning, and Catherine MacLellan. Other People's Lives, her 2019 debut album, was nominated for Music NS Americana Album of the year, and she is set to release the self-produced follow-up, Chasing Rabbits, a collection of songs about home life and wildlife, leaving and longing, and the meaning of home, set against the backdrop of the Canadian winter and featuring some of Nova Scotia's best players including The Bombadils and Bela Strings.