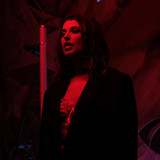 Ambitious, energetic and ready to fight for her ideas – CHERI. CHERI grew up surrounded by American pop culture and hip-hop music of the early 2000s, and the impact of the era can be heard in her music. She is still willing to explore the possibilities of one’s creative power: sometimes her music mixed with some Lithuanian folk harmonies and trap beats, sometimes with very un-Eastern-European likes of afrobeat. What CHERI hopes for and is working on changing is hip-hop without objectification of women. She believes in a new generation of self-sufficient, talented and hardworking alpha females. If you like Missy Elliott, Timbaland, Ciara, Lil Kim, Lauryn Hill, Britney Spears as much as Cheri does, her music might be exactly what your next playlist needs.