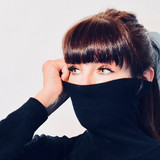 JVMIE is the brainchild of Jamie Lee Wilson, whose single “Back 2 Love” skyrocketed to #2 on the Billboard Club Charts. Born & raised on Australia’s Gold Coast, she started singing at 7. By the time she graduated high school she didn't have time to attend her prom as she had a performance the same night. She completed a Bachelor of Music in Jazz Voice at the Conservatorium of Music, all the while honing her song-writing craft. Spreading her wings to London a friend introduced her to the dance scene. Fuel to the Fire with Dutch producer Jesse Voorn featured on Dave Audé’s radio show & a month later she was in LA in the studio with Dave recording what would become their Billboard Club Chart #2 smash “Back 2 Love”. Having worked with dance legends Todd “The God” Terry, Stonebridge & Ron Carroll she decided to start a new project under the moniker of JVMIE. Her cover of Massive Attack’s “Teardrop” brought the Buzz Charts to tears. Festivals in the USA, UK & Australia, opening for the likes of Steve Aoki in Japan, Kelly Rowland in Australia & Kaskade in Amsterdam. JVMIE graced the Billboard charts again with "Chasing". "I’ll Give You the World" was Track of the Week on Apple Music & iTunes & "Hide" was released with legendary producer Darude. "I heard you singing on stage, absolutely singing your heart out & I was like, she’s got a f***ing great voice! The whole crowd was into you, I was really impressed, you really stole the show!” Markus Schulz