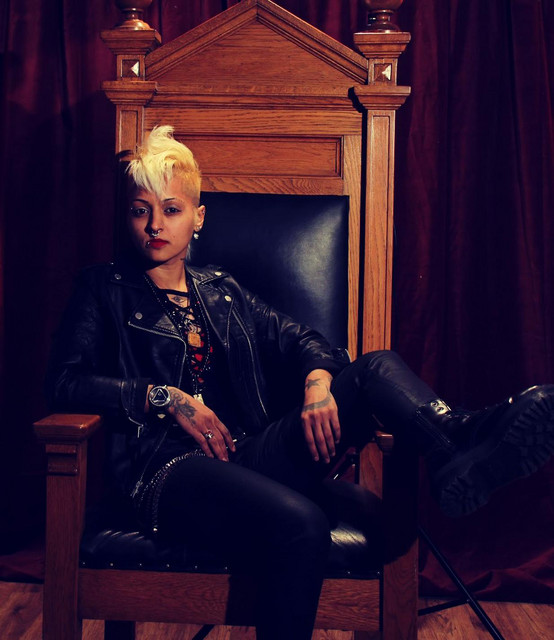 Urvah Khan (she / her) is a Canadian-Pakistani rocker based in Toronto.   Reconciling Muslim tradition with western culture has provided the fuel for Khan’s hybrid form of rock and roll she calls “Scrap” as in “Rock is dead. We rebuilt this from the Scraps.”   Urvah Khan was born in Karachi, Pakistan and arrived in Canada with her family as a teenager. The daunting task of fitting into North American culture as a non-conforming foreigner was at times overwhelming, but this backdrop shaped Khan’s path as an artist.   Khan currently resides in Toronto, and over her ten years as an independent artist has gained a worldwide following through her performances there, her hometown of Karachi, and Rock hotspots Los Angeles and London, UK. Her unique musical style has reached millions online, been recognized by BBC, CBC, Noisey/Vice, and heard on Sports Center LA during their coverage of the Winter X Games.   After a short visit to her country of birth in early 2016, Khan decided to introduce her style of rock music; “Scrap Rock,” to a Pakistani audience.   Believing that rock is to be re-born in the east, and building on the success of her debut Pakistani performance in 2017, Khan dedicated her 5th studio album ‘Muhajir’ (2020), sung in her mother tongue Urdu, to her Pakistani supporters.   With 26 music videos and millions of online views, Khan has begun working on her sixth studio album, set to release in 2021.