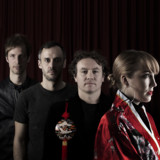 Since their explosion onto the Bristol electronic scene, Paper Dragon have been paving their way to success with a stream of highly regarded releases. Their recent singles Be Free, Loving You, Self-Control and Closer earnt them Spotify editorial support on the likes of New Music Friday, Run N Bass and Massive Drum and Bass, whilst their Birds of Paradise EP went onto be remixed by the likes of Emba, Sakurra and Coastal. With the ‘Dragons’ body of work featuring U2, Kate Bush, Massive Attack, Rick Rubin, Brian Eno, Underworld, KOAN Sound, TC, Distorted Minds, NAO, Mount Kimbie and Fred V & Grafix it’s no surprise the band is a one to watch. Meanwhile, their front lady Ruth Royall (whose soulful vocals soar over their releases) has also found success within the scene through her solo career. Her voice has been heard on the international airwaves, and has even received a nomination for Best Vocalist at the Drum and Bass Awards. Along with collaborating with some DnB's biggest names such Grafix, Pola & Bryson, Ekko & Sidetrack and the amazing Mollie Collins.