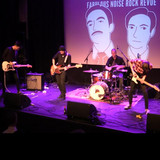 The instrumental noise rock stylings of no less than TWO Lindbloms. Rickard and Robert, respectively.Formed in 1984, started to make actual music in 2011. The debut album Sturm und Drang, a solid dose of no-nonsense instrumental noise rock, was released in 2014. Obducenten & Allmänläkaren followed in 2017, adding some weirdo experimentalism to the mix with its highly conceptual companion pieces, designed to be played simultaneously with either one of the other two. Trippy stuff indeed.A few associated bands are Traktor, Hundhuvet, Emerson Fittipaldi and Black Hearts Incognito.We have a new album coming out in 2020, and you better believe it’s going to be a good one! Listen to this playlist while you wait: 🔥🔛 FLAME ON! MIXTAPE!n!