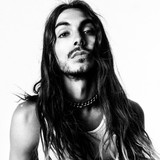 Paris Shadows breathes in dark memories and exhales a hypnotic hybrid of gothic alternative hip-hop cast in cavernous beats and guitar awash in reverb. Long before amassing nearly 100 million streams in just a year’s time, touring alongside Post Malone, and earning acclaim from the likes of No Jumper, an unbelievable life shaped this sonic maverick. He embraced “all or nothing” intensity as a child in Redding, CA. At eleven-years-old, he picked up cello and fell in love with the instrument in between immersing himself in punk and industrial music. In his college years, he quietly started producing under the name Prodbyparis for friends such as Machai. 2017 saw him pick up the microphone on a whim, cutting a demo for “Po’ed Up” and posting it on Soundcloud. A$AP Mob affiliate Tyler Gro$$o passed it on to Post Malone who invited Paris on tour. He caught the attention of 300 Entertainment who signed him and unveiled the official version featuring multiplatinum star Gunna. Within six months, it cracked 19.3m Spotify streams. He joined forces with producer Taz Taylor and legendary drummer Travis Barker to record his debut One Night In Paris EP. Its lead single “GONE” [feat. Trippie Redd] notched 27.8m Spotify streams with “ANGEL” eclipsing the 9 million-mark. It set the stage for his 2019 full-length, Shadows, led by the lead single “No Choice” produced by Keith Varon.