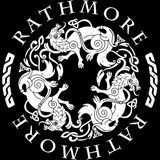 Since their highly anticipated debut in early 2017, Dallas-based Rathmore has quickly established themselves as a Celtic rock band that audiences of all ages can enjoy. The band’s contemporary take on traditional Celtic tunes is one of the many ways they create a family friendly soundscape, combining time honored music tradition with their original take on the genre. Band members, Mike Urness (guitar), Matt Willis (bagpipes), Gary Thorne (bass), Matt Thompson (drums) and Katrina Kratzer (fiddle) bring their combined years of talent, expertise and passion to create new sounds using beloved traditional tunes. Helping to showcase their talents is the irresistible charm of such tunes as “Molly Malone” and “The Ferryman” which can be found on their newly released 5-song EP, Mooncoin, which also features the jig by the same name. As former members of The Killdares, Willis, Thorne, and Urness are well known fixtures in the Celtic music community and have brought along a devoted following, even as Rathmore has just begun to make its mark. With the addition of Thompson and Kratzer to the band’s lineup, Rathmore’s quintessential sound encourages their fans to sing and dance along to their high energy and creativity while taking part in the camaraderie and chemistry the band so obviously enjoys on and off stage.