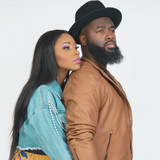 Bridgewater is an American contemporary Christian group. The Dallas, Texas based married duo specializes in uplifting, life affirming music that experiments with various music genres and world sounds. Bridgewater formally introduced their sound to to the digital music industry with their breakout EP “ The Mixtape” in 2017 with a summer anthem titled “ No Regrets”

that was quickly placed in Christian Hip- Hop and Gospel radio rotations. They followed the momentum with “ Designer” "Levelz" & "Shine" which solidified their creative artistry and attracted new listeners domestically and internationally.