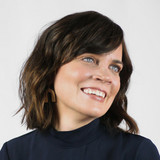 Ginny Owens has been releasing thoughtfully crafted songs for two decades, including defining hits such as “If You Want Me To,” “Stand With Me,” and “Echo.” Based in New York City, the multi-award-winning singer/songwriter has recorded more than ten albums, garnering critical success, chart-topping radio singles, and numerous film and television placements. Born and raised in Jackson, Mississippi, Owens discovered melodies on the piano before she could complete a sentence. Despite

a degenerative eye condition that left her completely blind at age three, the talented songstress