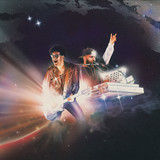 Chromeo’s Dave 1 and P-Thugg have turned an inseparable childhood friendship into a musical career that grows stronger than ever in its second decade, launching them from Montreal basements to main stages at festivals worldwide. Although they’re known for their analog synth grooves, super stylized live shows and over-the-top videos, Chromeo’s fantastic voyage has never been an exercise in irony or nostalgia. Rather, it’s a mission with a purpose: keeping the funk alive. Their 5th LP Head Over Heels came out in 2018 to critical acclaim, a Grammy nomination and two years’ worth of sold-out shows across the globe. After a 2020 quarantine spent tirelessly working in the studio (they launched their own label and released a COVID-themed EP which raised $80k+ for charity), the Funklordz return with their first ever live album — Date Night: Chromeo Live! out now!