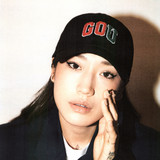 Peggy Gou is a South Korean-born DJ and producer based in Berlin. During the 2010s, she became internationally renowned for energetic DJ sets, which dreamily flow through various styles of techno, house, and electro. Her own tracks, such as the acclaimed 2018 single "It Makes You Forget (Itgehane)," are vibrant, joyous productions that echo vintage deep house and post-disco without sounding like a throwback. Gou seemed to appear out of nowhere in 2016, releasing no less than four 12" EPs of bright, slightly hazy house tracks during the course of the year. In actuality, she had been producing and DJing for several years -- she learned to beatmatch in Korea in 2009 and resumed the hobby a couple years later, when she was attending the London College of Fashion. After racking up gigs during the next few years, as well as moving to Berlin, she made her breakthrough in 2016, releasing two Art of War EPs on Radio Slave's Rekids imprint, "Day Without Yesterday" on Phonica White, and Seek for Maktoop on Technicolour. She also played dozens of gigs across the globe, including dates with Moodymann, the Black Madonna, Jackmaster, and others. Following an even busier 2017, which included her first American tour and a month-long BBC Radio 1 residency, Gou returned to the studio. Her Once EP was released by Ninja Tune in 2018, led by "It Makes You Forget (Itgehane)," a catchy single featuring Gou's Korean-language vocals. "Travelling Without Arriving" was issued by Phonica White soon afterwards. In 2019, Gou released the two-song Moment EP on her own Gudu Records, as well as her first mix CD, a volume of !K7's long-running DJ-Kicks series. ~ Paul Simpson, Rovi