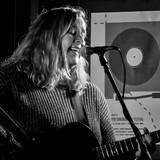 Susan's new album is The Hard Stuff — the award-winning Texas songwriter's seventh release as a solo artist and her first full-length album since 2011's Tight Rope. As she sings on The Hard Stuff's disarmingly playful title track, "Nothing lifts a heavy heart like some elbow grease and a funny bone" — and even when Gibson's not laughing at herself, her refreshingly clear-eyed perspectives on matters of life, love, work, and loss (sometimes all within the same song, as in the invigorating opener "Imaginary Lines" and the deeply moving "Wildflowers in the Weeds") illuminate the whole album with a spirit-charging current of resiliency. Of course, anyone familiar with Gibson's music knows that she's had that in her all along, from her salad days in the beloved Amarillo, Texas-based Amerciana band the Groobees back in the ’90s and from the get-go of her solo career with 2003's Chin Up. It was even all there at the very beginning, when she wrote a little song in college called "Wide Open Spaces" that grew up to become (with a little help from the Dixie Chicks) one of the biggest country songs of all time. Turns out all she had to do to rediscover it and get herself back on the road to embracing both life and art was to heed the best advice her father ever gave her, three little words that millions of Dixie Chicks fans (and a whole lotta Susan Gibson fans over the years, too) sing along to at every show: "Check the oil!"