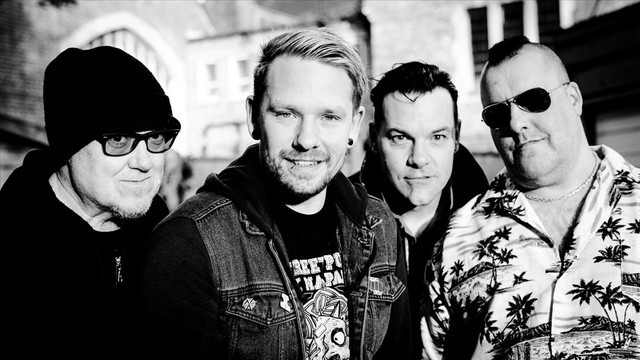 Peter and the Test Tube Babies

Known as much for their snarky sense of humor and working-class outlook as for their music, Peter & the Test Tube Babies were one of the early bands to emerge on the Brighton U.K. punk scene. It took the group a while to find their footing, but once they clicked, they became one of the most enduring bands in British punk, still recording and touring four decades after they made their debut. Peter & the Test Tube Babies were formed in 1978 by singer Peter Bywaters, guitarist Derek "Strangefish" Greening, bassist Chris "Trapper" Marchant, and drummer Nicholas "Ogs" Loizides. Within months of making their debut, the group appeared on a Brighton-themed punk rock compilation, Vaultage '78, with their tune "Elvis Is Dead." While the group kept up their live work, it wasn't until 1982 that they returned to the recording studio, though they made up for lost time that year, issuing two singles, "Banned from the Pubs" and "Run Like Hell," as well as a full-length album, Pissed and Proud. Only a few months later, their second LP, 1983's The Mating Sounds of South American Frogs, arrived in stores, and it was an unexpected hit, making its way to the top of the U.K. Independent charts. Now on a roll, the band became prolific, dropping two albums, Loud Blaring Punk Rock and Journey to the Centre of Johnny Clarke's Head, in 1984. 1986 saw the release of Soberphobia, which a year later would become the group's first U.S. release (Profile Records retitled it Peter & the Test Tube Babies for stateside distribution). There would be a three-year layoff before the group re-emerged with a live album, 1989's Live and Loud!!, with a new studio set, The Shit Factory, following in 1990. Peter & the Test Tube Babies kept busy as a live act throughout the '90s, but their studio output slowed -- they released only three more studio albums (Cringe, Supermodels, and Alien Pubduction) by decade's end. In the 2000s, Peter & the Test Tube Babies were not as busy as they once were -- Greening was hosting a radio show in his downtime, and Bywaters was teaching English as a second language -- but they still found steady work on the road and released albums periodically, including 2012's Piss Ups, a collection of covers whose sleeve parodied David Bowie's Pin Ups. In 2017, the band toured the United States in support of their album That Shallot, and they made headlines when Bywaters was deported after a show in which he dressed up as Donald Trump on-stage. Some media outlets reported that Bywaters' less than flattering impersonation of the President was the reason he was sent back to the U.K., but U.S. Customs and Border Protection officials insisted it was simply a matter of Bywaters having the wrong visa. ~ Mark Deming, Rovi