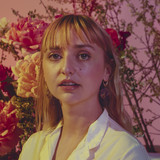 In her everyday life, Mackenzie Leighton works as a florist while composing sweet melodies and poetic lyrics. Originally from the United States, she grew up in a small seaside town in Maine. After spending her childhood playing classical piano, she left Maine for New York at 18 and played in several folk, jazz, and indie-pop inspired bands, Mizuna and Strange Loops. In 2017, she arrived alone in Paris and launched her solo musical career, electric guitar in hand. With simplicity and precise songwriting, her first eponymous EP Mackenzie Leighton released just after she arrived in France lulls us into an indie folk universe through the stripped down tracks. “Listening to her music is a shelter,” says Savage Thrills. Her sensibility falls in line with the tradition of folk singers like Joni Mitchell, while remaining modern in the style of Phoebe Bridgers or Julia Jacklin. Her second project Tourist(e) released in 2020 marks the transition of an artist who lives and creates between cultures, mixing her folk roots with a richer and more modern instrumentation as she surrounds herself with French musicians and producers. Mackenzie intimately reveals the reality of her expatriate life, torn between both sides of the Atlantic, and pushes the boundaries of her own identity in "Fleuriste", released in June 2021. As Rolling Stone says, Mackenzie Leighton "should put some sunshine in your weekend."